When I first started out, I made this exact assumption. But I always wondered how some of the cheaper hotshoe flashes would hold up against these higher priced competitors.

It feels sturdy in my hand and I have dropped them from decent heights on more than one occasion without any problems not that I recommend it, but it's nice to know they can handle an accident or two. Overall the flash has a lot of similarities to other brands.

The head swivels up and down and rotates side to side, there is an AF assist light, built in wide panel diffuser and bounce card, backlit display panel, and most other features that you would expect in a hotshoe flash. Most flashes have a switch or a lever that drops down a pin in order to lock the flash into place on your PHOTTIX Mitros TTL Flash for Sony. This flash has the same feature, but in addition, it has a rubber gasket that also drops down that creates a more sturdy lock.

This really comes into play when mounting the flash onto a cold shoe for off-camera lighting. Before, when using flashes with just a dropdown pin, the flashes would be locked into place but would still feel loose and wobbly.

With this rubber dropdown, the flash feels very sturdy and there is zero play between the flash and the cold shoe. Another cool feature of the build is with the battery layout. Most flashes have you insert the batteries by alternating them between the positive and negative sides. Do I place the positive in first, then negative? Or the other way around? What always ends up happening is you have you look inside the compartment to figure it out. Not a huge deal until you need to change batteries in the dark. 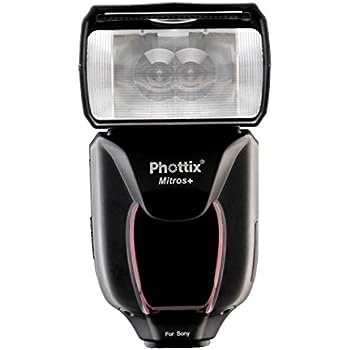 Features Taking a look at some of the internal features, there are PHOTTIX Mitros TTL Flash for Sony lot of things you would expect to see. Things like TTL, manual, multi-strobe, zoom control mmetc. But one of the main standout features is the built-in wireless receivers and transmitters. What this means is that with the use of a Phottix transmitter Odin II, Odin, or Stratoyou can trigger this flash off camera without needing to attach any type of radio receiver. Not only that, but each flash also doubles as an Odin transmitter.

While the flash is attached to your camera and being used as a transmitter, you also have the ability to control each off-camera flash the exact same way you would as if you were using an Odin transmitter. The on-camera flash can also be used as a flash and transmitter at the same time.

I really love this feature because not only does it eliminate all the hassles of carrying, charging, and setting up radio receivers, it also means that I now have multiple transmitter backups. No more wasting money on a backup transmitter that will end up spending most its time locked in a bag.

Instead I can use that money to buy another flash that I can actually use and then that flash also doubles as a backup transmitter. Another cool standout feature of this flash is the ability to save and load a set of three different settings. With this feature, I can have the flash set to my ideal settings for shooting weddings and save that to slot one something like silent operation, TTL, AF assist light ON, etc.