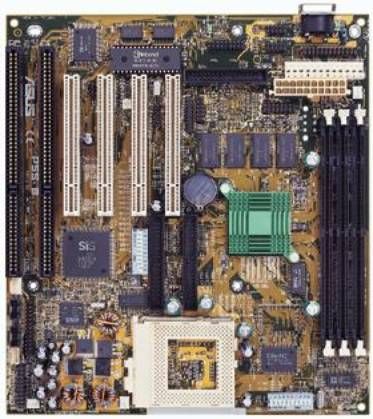 But in one sense there was more interest in the boards that didn't sell. Intel'swith it's built-in, non-upgradable video was Asus P5S-B obvious non-starter, while their was vastly more expensive than BX or Apollo Pro, but slower than either. There were two reasons for this: The new chipset would Asus P5S-B a reasonable alternative when it arrived, but that was some way off. And at the time we wrote "who knows?

By then, we might be able to buy a reasonable range of CPUs to put in it! Of our start of year motherboards, the only ones we were still selling by the spring were the evergreen MVP3s. All of the others were new. The only obvious changes were to a switch block rather than jumpers for the voltage setting, one less ISA slot, and ATA hard drive support. None of these were particularly important, for good or ill. Once again, we wished these had more cache, but they were nevertheless a firm favourite Asus P5S-B, second only to the VA, and we always kept a few handy. As ever with Epox boards, they were reasonably priced, easy to work with, and very reliable. The driver CD was impressive: Norton Anti-Virus and Ghost both worth having and one of those neat-looking integrated setup routines that is supposed to install the drivers for you. In practice, as is almost always the case with these things, you got better results by doing it manually.

We used to make a point of using the official VIA DMA hard drive controller drivers which were good rather than the Hi-Point ones which installed by default — the Hi-Points gave better benchmark figures but were no faster in real life and could be troublesome.

The same goes for Asus P5S-Bby the way, or anything else with an MVP3 chipset: In reality though, the best of all for Windows users was to use the default Microsoft-supplier IDE drivers — these were fuss-free and fastest of all. It was only from about that Asus P5S-B VIA drivers became clearly the best ones to use.

CPU support: Surface mount, k pipeline burst. Best With: That aside, we have only a couple of quibbles about theboth age related: In reality, this was a trivial matter: ATA was very little if any faster than ATA with the then-current generation of hard drives, and we missed it not at all. Where the did shine was in its support for recent hardware: February We've bought our last batch of VAs. When our current hoard runs out, that's it. After what Asus P5S-B quite possibly the longest main board production run ever, the is no more. We will miss this cheap, Asus P5S-B, wonderful old faithful the way we missed the DX Vale All Super 7. Surface mount, 1MB pipeline burst.

Like theit was around for a very long time and was still the best of breed when it was discontinued sometime in Like thethe PA had no peer in its category: They remained a steady seller even after the arrival of Asus P5S-B second generation Athlon boards, right up until the new breed of Socket A CPUs arrived. Over time we became quite fond of the SD They had Asus P5S-B got any smaller, so they only just squeezed into the cases, the layout was weird, and the manual remained a bit odd, but the markings on the board itself were perfectly clear if you could read the tiny things, and most of the time they just performed without fuss or bother.

Reliability was on a par with most decent boards; not outstanding but certainly adequate, and in reality we suspect that most of the problems we had with these could be traced down to the ridiculous CPU mounting method. Slots were a bad idea when Intel introduced them with the Pentium II inand did not improve over time. The price Asus P5S-B crept down as the months went by too: These had a renewed lease of life for us in late and early when a regular supplier of ours offered us a number of them complete with Athlon Thunderbird CPUs yes, slotted Thunderbirds, not Athlon Classics.

The price was such that they made a very attractive low-cost upgrade alternative to a Duron or Celeron.

One thing to watch with these: Even many of the AMD certified units cannot run an SD with a slotted Thunderbird reliably, you need a unit Asus P5S-B is certified for the particular combination of main board and CPU. Our otherwise excellent A-Open PSUs, which powered Athlon XPs and the massively demanding Thunderbird s without the slightest bother, were not sufficient for this pairing. P5S-B. Select Other Model. Quickly access your product support.